Captain Marvel vs Thor With Stormbreaker In The MCU – Who Would Win?

With Captain Marvel releasing into theaters, viewers got to finally see how powerful Carol Danvers will be in the MCU. While in Marvel Comics she’s usually under the power levels of characters such as Thor and under the strength level of characters such as The Hulk. The MCU, however, has different power levels for their characters. Considering she’ll likely be joining the Avengers, Captain Marvel will add to a roster of heavy-hitters such as Thor, Iron Man, The Vision, and Hulk. However, in typical comic book movie fashion, it wouldn’t be shocking to see Captain Marvel fight an Avenger when she first meets them. The best guess would be her fighting Thor, maybe he senses her energy being like an Infinity Stone’s energy signature which triggers him. So, who would win in this fight, Captain Marvel or Thor?

For the sake of this comparison, we’re going to judge them by strength, speed, durability, fighting ability, and energy abilities.

For strength, it appears that Thor should win this one although it may be closer than most think. Thor is stronger than most Asgardians, showcasing feats of strength across his multiple appearances. Notable feats of strength include lifting a falling car with one arm without effort, fighting toe-to-toe against the Hulk, holding the iris of Nidavellir, and crushing Iron Man’s MK VI armor. His strength was also showcased in Thor: Ragnarök when he effortlessly threw a scavenger hundreds of feet away with one arm. Captain Marvel, from what was showcased in her film, didn’t showcase superhuman strength to this degree. The argument can be made that she was discovering her abilities but even still her greatest strength feat was stopping and throwing a Kree missile while it was heading towards Earth. This was an impressive feat, considering the missile had its own propulsion system.

For speed, Captain Marvel likely has the edge in this category. While her running speed appears to be like a human running, she has flight at speeds beyond fighter jets. This makes sense considering the energy she absorbed, during her accident, stemmed from a light-speed engine based on energy from the Space Stone. She showed the ability to go from ground level to space within seconds, and it’s been assumed due to her abilities and their origins she can likely reach the speed of light while in flight. Thor, on the other hand, can travel beyond the speed of sound when he had Mjolnir. With Stormbreaker, Thor can summon the Bifrost which allows for travel beyond the speed of light. However, due to Carol’s speed not requiring an external weapon she has the edge in this category. 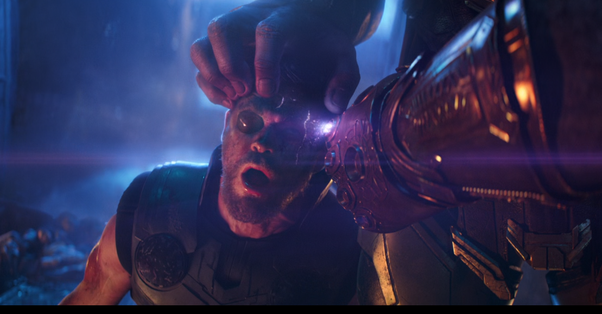 For durability, Thor appears to potentially have the advantage based upon feats shown in Thor: The Dark World and Avengers: Infinity War. In Thor: The Dark World, we see Thor take an absolute punishment from Kurse without much visible damage along with him withstanding direct blasts from the Reality Stone. In Avengers: Infinity War, Thor endured the power of the Nidavellir star and direct contact with the Power Stone being used against his head. Along with his resistance to damage Thor also has an impressive healing factor, allowing him to heal in seconds with Stormbreaker.

Captain Marvel seems almost invincible as well due to her abilities. Before having her limiter removed, Carol survived falling from the atmosphere into a Blockbuster store without any discomfort. When she had her limiter removed, she was also able to survive in space without the need for extra assistance along with being able to handle penetrating through Kree missiles and ships without damage to herself. Based on this and statements made during the movie, it seems as if she is practically invisible to physical damage while at full power which gives her the edge in this category.

For fighting ability, Thor wins this category with ease. While Carol was able to fight and defeat 20 of Talos’ be Skrull warriors with her hands bound, she still had trouble defeating Yon-Rogg in combat. Beyond that, her experience in the field for missions was minimal due to the Supreme Intelligence deeming her emotions a weakness hindering her focus. Thor, on the other hand, has been fighting various aliens and threats across the galaxy for over 1,000 years. Thor makes mention of this when he tells Rocket Raccoon, “You know, I’m 1,500 years old. I’ve killed twice as many enemies as that. And every one of them would’ve rather killed me, but none succeeded.” When he lacked his physical strength, he still took down multiple SHIELD agents. Coulson referred to this moment when he said, “[Thor] made [his] men, some of the most highly trained professionals in the world, look like a bunch of minimum wage mall cops.” Because of this, it makes no sense to give the category of fighting ability to anyone besides Thor.

For energy abilities, Thor and Carol may stalemate to a certain extent due to Stormbreaker’s performance against the Infinity Gauntlet. Even without the axe, Thor has natural energy projection and manipulation relating to electricity and lightning. Relating to his title as “God of Thunder,” Thor can summon lightning powerful enough to destroy the Rainbow Bridge, damage Hela, and even release bursts of electricity from his body while seamlessly summoning lightning strikes. Thor destroying the Rainbow Bridge is impressive as it was shown in Thor 1 it would take him multiple powerful strikes with Mjolnir to crack and later shatter the Rainbow Bridge.

For Captain Marvel, her energy abilities are basically the foundation of all of her other abilities. Her photon blasts appear to be the equivalent to a blast from a weapon utilizing Tesseract technology. When this was shown in Captain America: The First Avenger, it could vaporize a human in a single blast. However, it showed a weakness to Vibranium which was similar to how Thanos with the Power Stone could be resisted by Tony’s MK L armor shield. Like Thor, Captain Marvel can use her energy abilities to enhance her physical blows. I would personally say Captain Marvel’s energy abilities are greater than Thor’s since they come from an Infinity Stone, although Stormbreaker’s ability to cut through Infinity Stone energy blasts may provide an advantage allowing Thor to defeat her.

Overall, Thor should win on paper against Carol unless she gains further abilities or skills not alluded to from her movie. Regardless of the result of this hypothetical match-up, both characters are heavy-hitters which will give Thanos a run for his money.